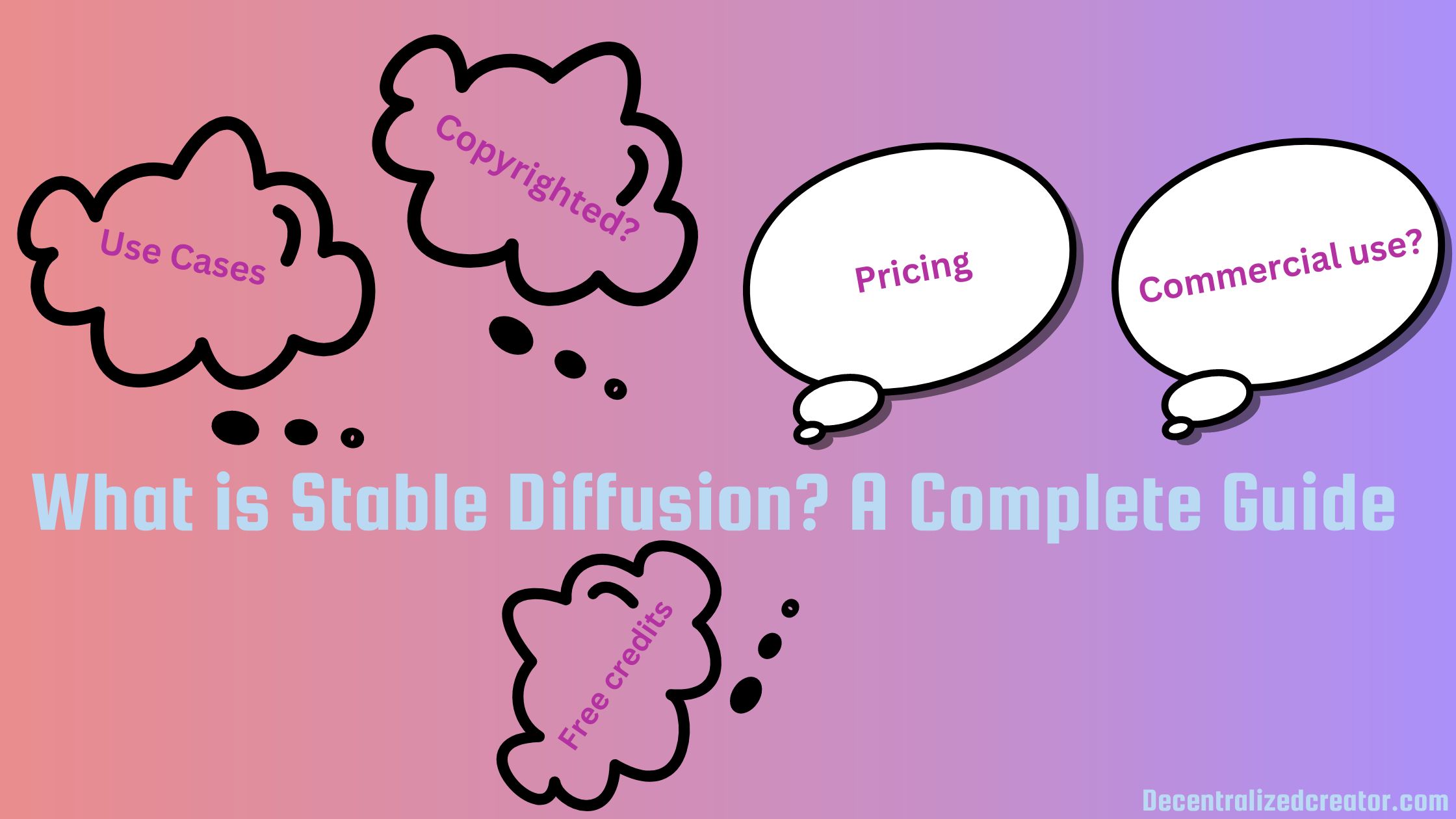 What is Stable Diffusion?

Stable Diffusion (SD) is a text-to-image generative AI model that was launched in 2022 by Stability AI, a UK-based company that builds open AI tools.

Stable Diffusion generates images in seconds conditioned on text descriptions, which are known as prompts. It is not only limited to image generations but also does tasks, such as inpainting, outpainting, and image-to-image generations guided by prompts.

Since Stable Diffusion is a deep learning model, it is trained on billions of text-image pairs to generate images from mere text.

How Does Stable Diffusion Work?

Deep learning (DL) is a specialized type of machine learning (ML), which is a subset of artificial intelligence (AI). 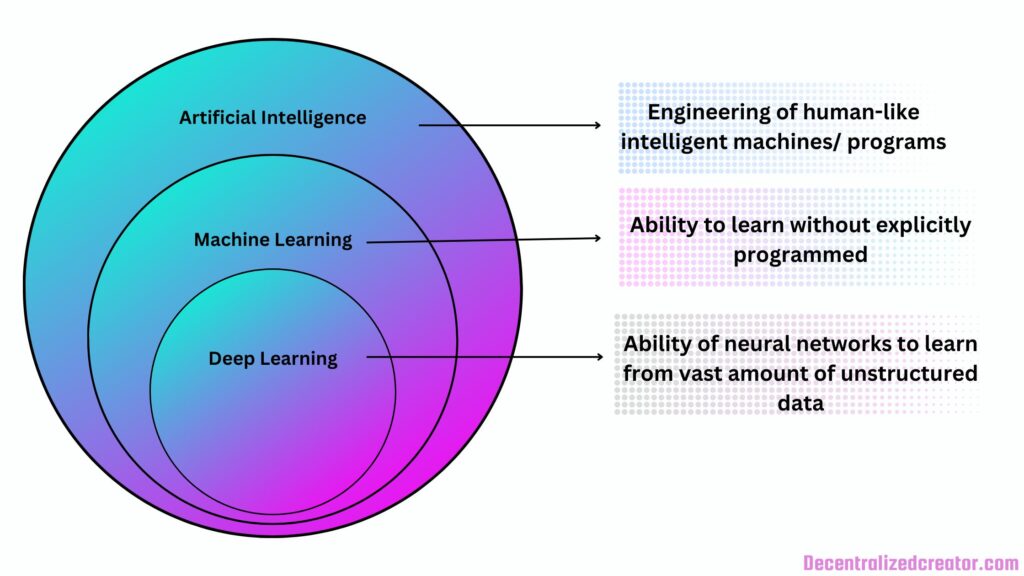 Deep learning enables computers to think like humans by analyzing and exchanging data across different nodes—exactly like data transmission between neurons in the human brain—from the given datasets.

Unlike machine learning, deep learning can analyze unstructured data, such as text, images, videos, and audio with the help of a complex structure of algorithms known as artificial neural network (ANN).

Generative AI is a technique that creates new content, such as text, images, audio, video, or code based on existing datasets. It leverages deep learning algorithms to detect the underlying pattern in the input and produces similar content.

Some examples of generative AI include GPT-3, Stable Diffusion, DALL.E 2, and Midjourney.

Now, that you know about deep learning and generative AI, let’s move on to the architecture behind Stable Diffusion. 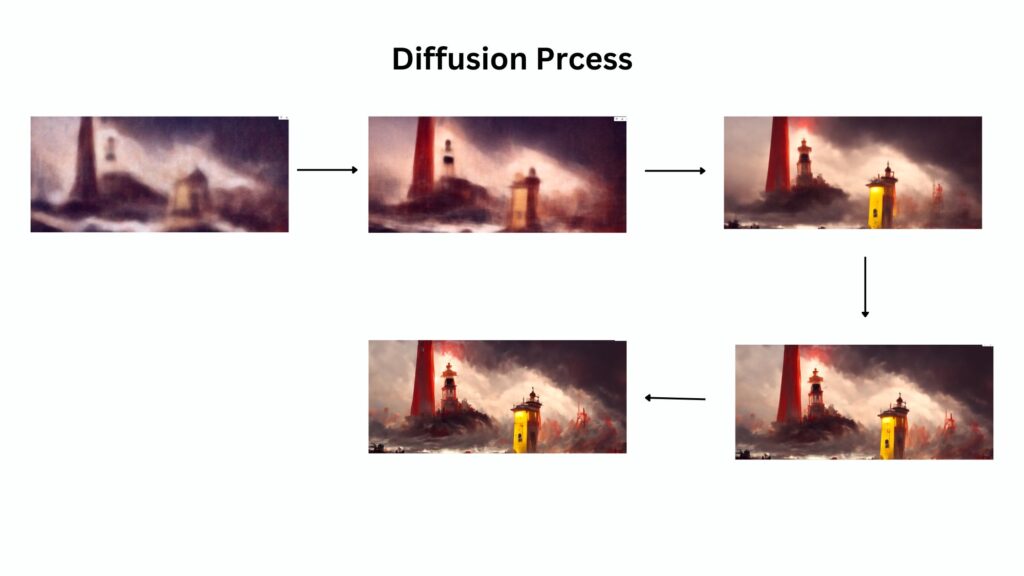 The diffusion model works directly with pixels, the large data inputs. Since it deals with large input data, there comes a struggle in terms of computation issues.

To overcome the computational issues of Diffusion Models, Robin Rombach and his colleagues discovered a model called the latent diffusion model (LDM).

The latent diffusion model deals with compressed images instead of regular images. Hence, no more dealing with large input data.

Working with compressed images while keeping as much information as possible will lead to faster generation as the data size is much smaller. If you take a look at the overview of the latent diffusion architecture image, the input image X is being encoded and infused into the space called latent space Z. The encoder is used to extract information from the input and send it to the latent space Z. The working mechanism of the encoder is very similar to GAN.

Then, the input image gradually turns into noise following the Markov chain, and by the time it reaches the noisy latent vector ZT. After that, the denoising process takes place in the pre-trained de-noising autoencoder with skip connections for attention Q, K, V.

Lastly, reconstruction of the input image takes place using the decoder D. Then, the modified and de-noised image transforms into a final high-quality image.

As mentioned earlier, Stability AI—the company that released Stable Diffusion (SD)—made Stable Diffusion open-source. Means that anyone can view, edit, and built models upon the SD code which is available on Hugging Face as well as Google Colab notebook.

Stable Diffusion was created by the combined efforts of researchers and engineers from CompVis, Stability AI, and LAION.

Most of the companies behind generative AI models or AI art generators must have used a few open-source datasets for training the models. Likewise, Stable Diffusion used the LAION-5B dataset, which consists of 5.85 billion multilingual CLIP-filtered image-text pairs. The LAION-5B is an open-source dataset that was created by the Large-scale Artificial Intelligence Open Network (LAION).

How to Use Stable Diffusion

Meanwhile, you can check out the Stable Diffusion public demo on Hugging Face. Enter the prompt in the given box and click “Generate image”. After clicking the “Generate image” button, you will get 4 AI-generated images. 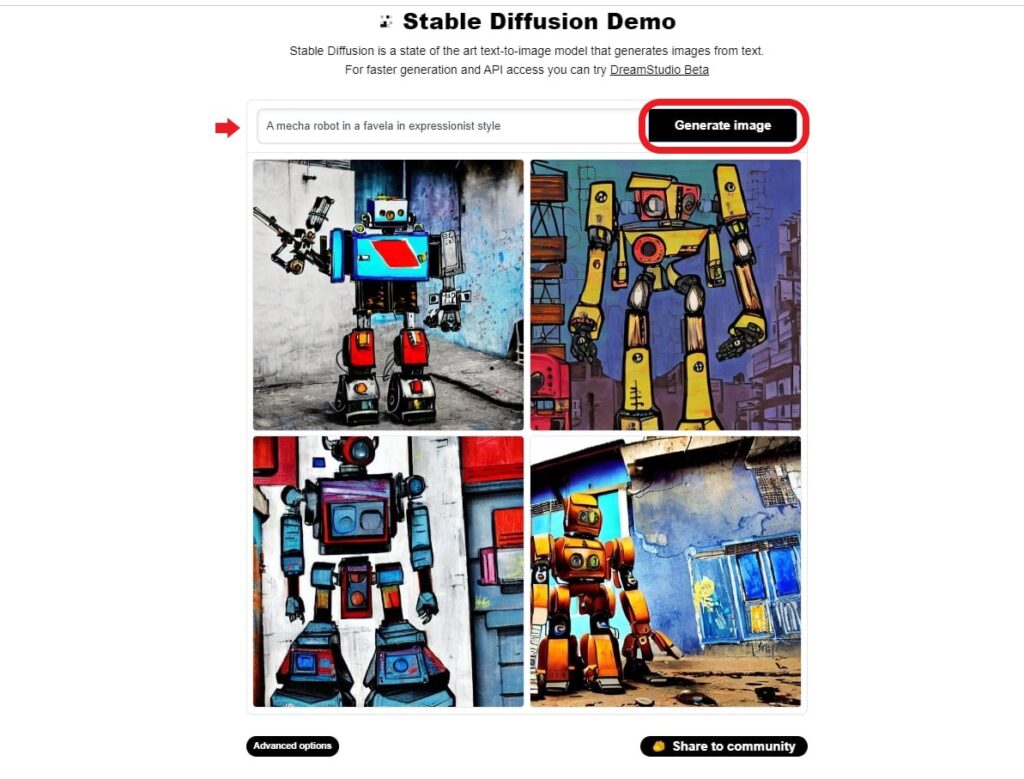 If you don’t know how to prompt, check out our famous article “Prompt Engineering Made Easy” or click on any of the examples given in the Hugging Face SD demo page. You can also access the “Advanced options” given. 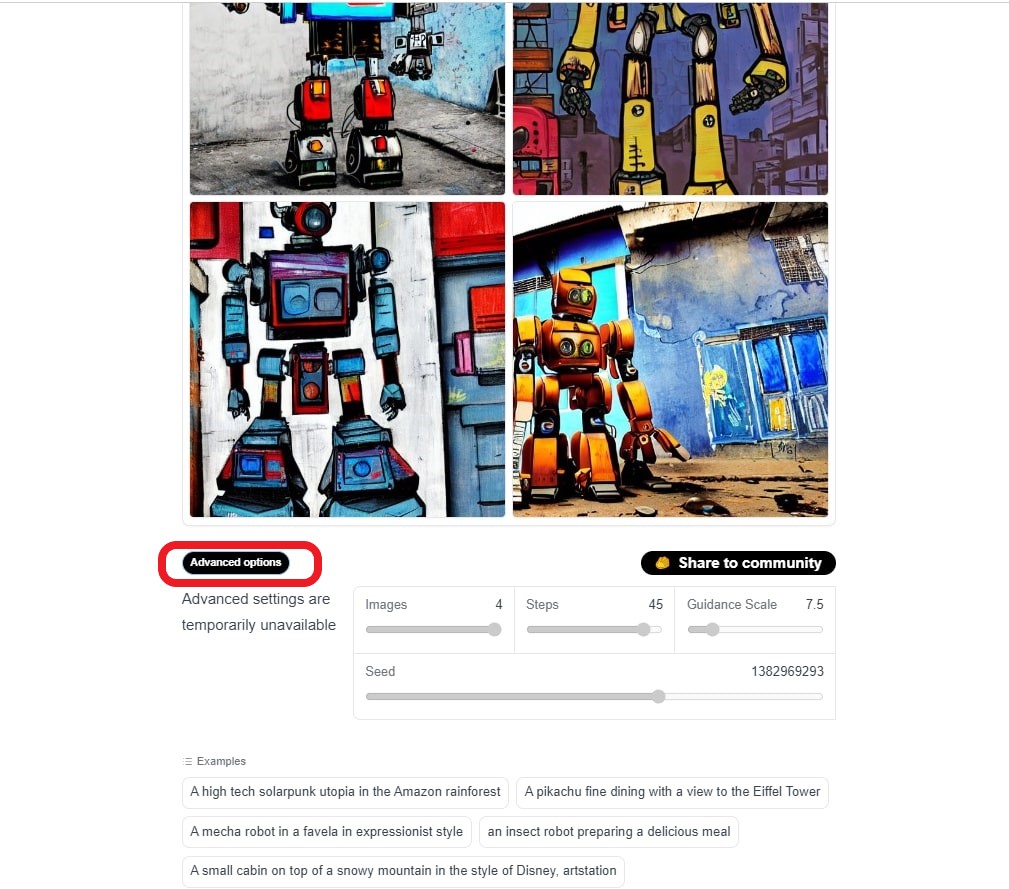 Stable Diffusion hosted on Hugging Face is just a demo, and it runs on CPU rather than GPU. Therefore, you can expect a faster generation.

Once you have signed up for DreamStudio, you can start prompting. You can also use the free prompt generators available for Stable Diffusion.

Enter the prompt in the given box and click “Dream”. Wait a few seconds to get the high-quality AI-generated image.

You can find all the AI-generated images on the “History” tab. To check the free credits, click the “Profile icon” and click “Membership”.

For better output, try the additional settings located on the right side of the DreamStudio application.

If you have used all of your free credits, you will need to pay for a membership. See below for pricing details.

Stable Diffusion is free forever if you run it on your local device (see the next paragraph).

However, using Stable Diffusion on DreamStudio is not always free. If you run out of your free credits, you need to pay for the membership.

While the company Stability AI provides free open-source AI models, their services— like DreamStudio—are not open-source and free.

Taking complex things and simplifying them comes with a price.

Currently, the pricing structure of DreamStudio is very simple. However, Stability AI might change the pricing in the future. Once you run out of the 200 free generations, you need to buy a membership that costs $10. You can perform approximately 1,000 generations with this membership.

Normally, each generation will consume one credit. But, the credit per image can vary from 0.2 credits to 28.2 credits, depending on the additional settings, such as image resolution, step count settings, etc.

If you are an organization or an individual looking for a Stable Diffusion API, here is the pricing for it.

For more details on pricing, check out the Stable Diffusion Pricing article.

Since Stable Diffusion is an open-source model, you can run it on your Linux, Windows, or Mac computer for free. However, your machine needs to fulfill the following system requirements:

The method that I’m going to reveal is the easiest way to run Stable Diffusion without going to the command line or local web server often.

UnstableFusion is a GUI for Stable Diffusion like DreamStudio but for desktop. It comes with all the essential features, which include inpainting, img2img, and more.

The UnstableFusion requires you to install Python, the Stable Diffusion model, and other components before using it.

For more information on how to run and use Unstable Fusion, refer to this step-by-step article.

Diffusion Bee, on the other hand, is exclusively for Mac computers. Ensure to have Mac M1/ M2, to use Diffusion Bee.

Diffusion Bee does not require Python, the Stable Diffusion model, or other components like UnstableFusion. Rather, it is of the plug-and-play type. Just install the Diffusion Bee application, give the prompt, and click “Generate”.

How to Get More Stable Diffusion Free Credits

You can run Stable Diffusion with unlimited free credits if you run it on your local machine.

If you find it difficult to use Stable Diffusion on your local machine because of system requirements or manual Python and other dependency installations, you can use SD with more free credits on platforms that have a similar GUI, like DreamStudio.

Yes, there are ways to get more Stable Diffusion free credits. To get more SD credits,

Use Cases of Stable Diffusion

The Stable Diffusion has enormous potential to be unleashed. It is like a car with high horsepower. If you know how to handle it (prompt well), you will get unforgettable moments.

Stable Diffusion Use cases include:

There are people who have made money-making projects using Stable Diffusion and other generative AI models. Danny Postma, a serial entrepreneur, made many AI products. 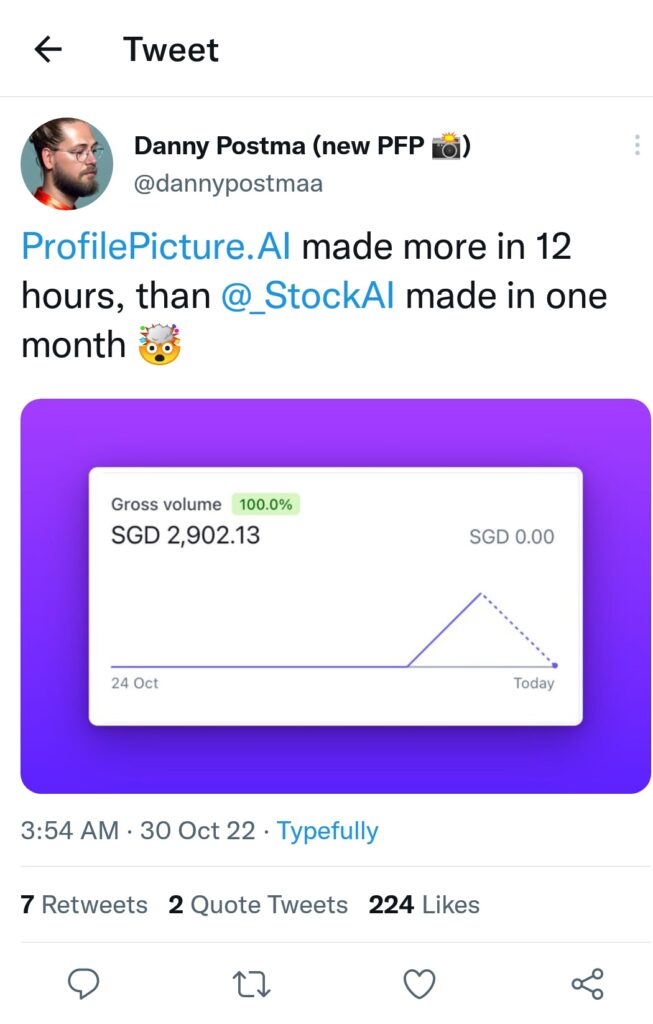 ProfilePicture.AI, TatoosAI, and StockAI are cool products built with the help of Stable Diffusion and other generative AI models.

The other guy is Levelsio, an Indiepreneur, who made projects named AvatarAI and Interior AI. Both projects started making money for him.

Being part of a community makes you intellectual. There are many updates, events, and models being built on Stable Diffusion every week.

Apart from the news, trend, and event updates, the community is one of the best places to take prompt inspiration from other fellow artists. Actually, I wrote an article about stealing prompt ideas from other artists.

The Stable Diffusion official Discord channel allows its members to try the new version of the model. 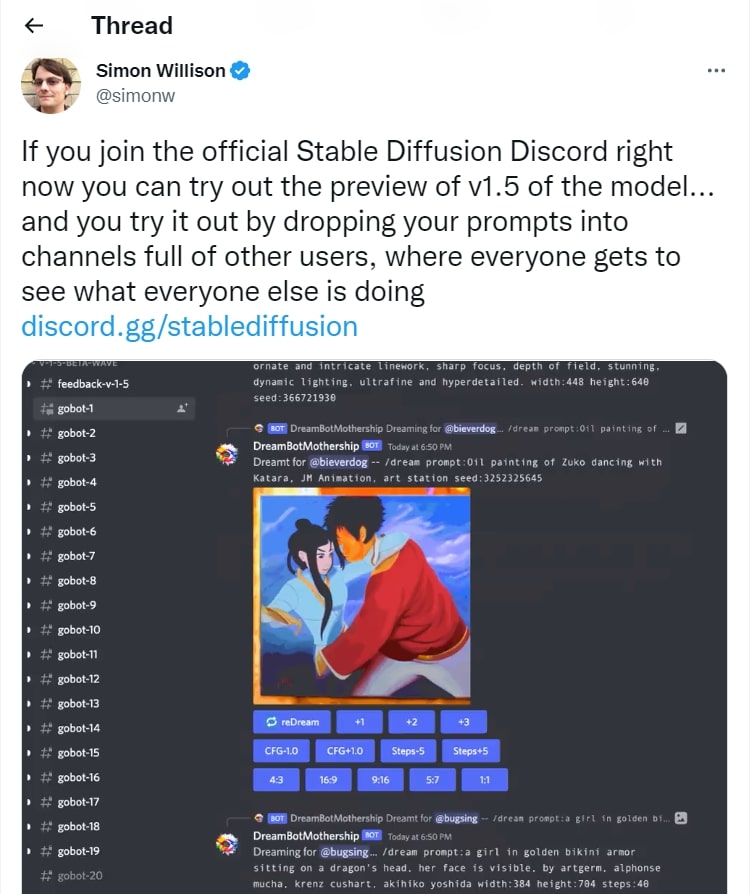 There are many quality generative AI Discord channels available for all AI enthusiasts and emerging AI artists other than the Stable Diffusion Discord channel.

Are Stable Diffusion Images Copyrighted? Can It Be Used for Commercial Purpose?

This is the single biggest question that pops into the mind of all Stable Diffusion users. The short answer to this question is no for copyright and yes for commercial use.

However, users must stick to the ethical ways mentioned on the license. Also, the policies of Stability AI are not definitive and are subject to change.