Non-Fungible Token (NFT) is a buzzword in 2021 around the crypto Twitter community. At first, you may notice a weird monkey profile picture among Twitter users, and the big shot of Crypto Twitter brags about NFT purchases by changing their Twitter profile pictures.

Twitter is where all relevant and up-to-date information of NFT, crypto would get shared first, and then mainstream media would catch up later. Twitter is where the real action of NFT would get started as almost all famous artists, collectors, and builders share a frequent update on NFT’s creation and purchases.

Thousand of NFT projects are getting launched each passing day and it is very harder to find legit NFT projects. With the increase in NFT popularity, there is a raise in NFT Scams as well.

If you are interested to learn more about NFT, finding the legit NFT project, finding a great profitable NFT project to invest in. Then you have to expose to the valuable NFT information which only gets shared on Twitter. 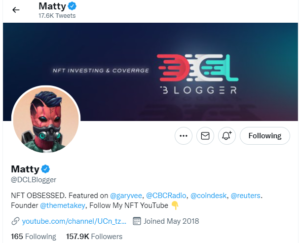 Matty is the one who constantly shares content in form of tweets, blogs, and Youtube videos that educate his followers. He is one among the few people who drop valuable NFT content on Twitter. He is the founder of MetaKey and runs a Youtube channel where he constantly shares what is happening in the NFT world.

Matty has been featured on Garyvee, Coindesk, and Reuters. 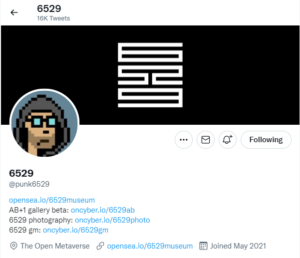 6529 followed around 200k Twitter followers. 6529 is a great NFT Crypto art collector and he has collected more than 1.4K digital NFT’s in Opensea. You can look out at his entire collection of photos, NFT arts, and artworks. 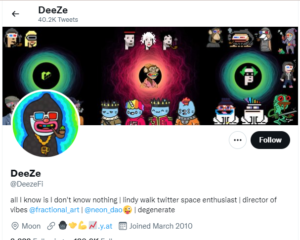 Deeze is director of vibes at Fractional.art where you could able to buy, sell and mint fractions of NFTs and NEONDAO  which help support and build the vision of the metaverse. Deeze is followed by more than 130K followers and he is one of sought after among the NFT Twitter community. 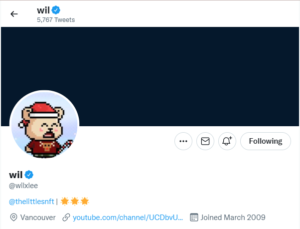 Wilson K Lee is an entrepreneur and founder of LittleNFT and his tweeter thread on how to create a successful NFT series which went semi-viral among the NFT Twitter community. Wil is someone who started from the bottom with very few followers on Twitter and launch his own successful NFT series. Wil constantly shares his learning on his Youtube channel entirely dedicated to NFT’s. Currently, Wil has around 52K followers on Twitter. 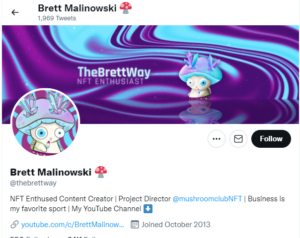 Brett Malinowski is NFT Enthused Content Creator and he owned NFT focused Youtube channel where he shared how certain NFT project exceeds and his NFT strategy. He is the project director and co-founder of mushroomclubNFT.  Most of the tweets are regarding NFT and his NFT strategy. 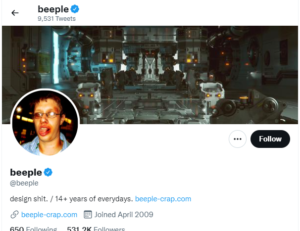 Beeple is Mike Winkelmann who does a variety of digital artwork including short films, AR/VR works. His popularity shot up once he sold his NFT for $69 million and it overall increase the hype for Crypto art and NFT’s. Beeple share his artwork regularly on Twitter consistently every day for 14+ years. Beeple amasses more than 550K followers. 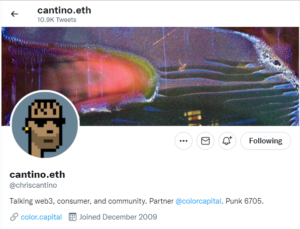 Chris Cantino was the co-founder of Color Captial and the fund is completely owned with no outside capital. Chris Cantino specializes in consumer products and emerging commerce platforms, especially on NFT and web3. His tweets were around web3 and NFT’s. 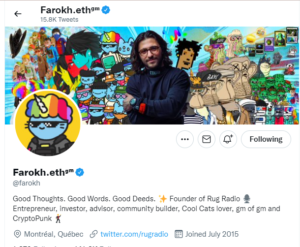 Farokh Sarmad is the CEO of Goodlife Media and he is best known for starting @goodlife Instagram page which amasses more than 2.5 million followers. Currently founder of Rug Radio, Community builder and Collector of Cool cats and Crypto punk. Farokh is followed by more than 141k followers on Twitter. 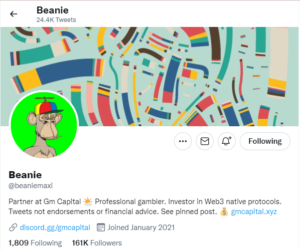 Beanie is a partner at Gm capital which currently invests in NFT and DEFI projects. He is an investor in Web3 native protocol. You can follow him to get to know what is happening in NFT and DAO spaces. Beanie is a collector of NFTs like Crypto Punks and Cool Cats. 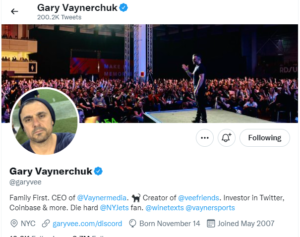 The list would be incomplete without adding Gary Vaynerchuk. He is a mass propellant for the entire NFT ecosystem. Gary is followed by more than 2.7 million followers and he is the CEO of Vaynermedia. His NFT collection VeeFriends made him more than 90 million in 90 days. You can catch up on other social media as well from Instagram, Youtube, Tiktok, Linkedin. Many people including Logan Pual, Mr beast purchased their NFT because of Gary Vee. He influenced many people to get into the NFT ecosystem. You can consume all forms of media content on NFT through GaryVee from Audio, Tweets to Video. 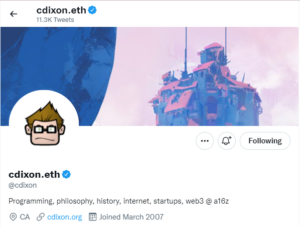 Chris Dixon is a partner in a16z who tweets entirely focused on Web3, Crypto, and NFT. By following Chris you will get a sneak view of the entire crypto and NFT industry. Chris is followed by more than 763K followers and his tweet on Web3 went semi-viral and it is liked by more than 30.1k and retweeted more than 11.1 times. 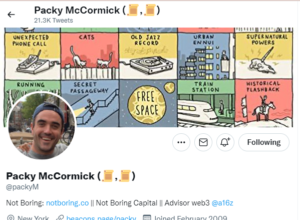 Packy McCormick is the founder of notboring.co a newsletter where he decodes the potential of each company and industry and it is read by more than 94K members. Packy firm believer in Crypto, NFT, Web3, and Creator economy. You can check out his detailed analysis of Solana and NFT. He is advisor web3 at a16z. Packy is followed by more than 120k members on Twitter. 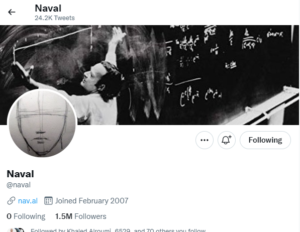 Naval is the founder and chairman of AngelList and he is a firm believer in Web3, Crypto, and NFT communities. Naval is one of the finest minds in tech and Silicon Valley. His How to Get Rich ( without getting lucky) went viral and it was liked by more than 180K members and retweeted by more than 66.5K members. You can follow not only Web3 and crypto but for his philosophical approach towards life. 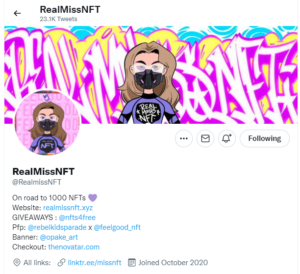 RealMissNFT is followed by more than 110 K followers and she covers upcoming artists on her website  Realmissnft.xyz. She covers 2 artists every week on her website and talks about the upcoming projects, artist stories, and featured projects. Her daily tweets on NFT’s and shares many updates on upcoming NFT projects that have good potential. 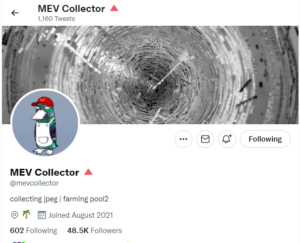 MEV collector has been one of few greatest NFT collectors. His tweets about NFT Flipping went semi-viral among the NFT Twitter community. He has collected more than 9.7k items on OpenSea. He was a master’s pro at Flipping NFT’s and he had made over 862 ETH in 33 days of flipping NFT’s.

Some of the other Twitter Profile you should consider following are