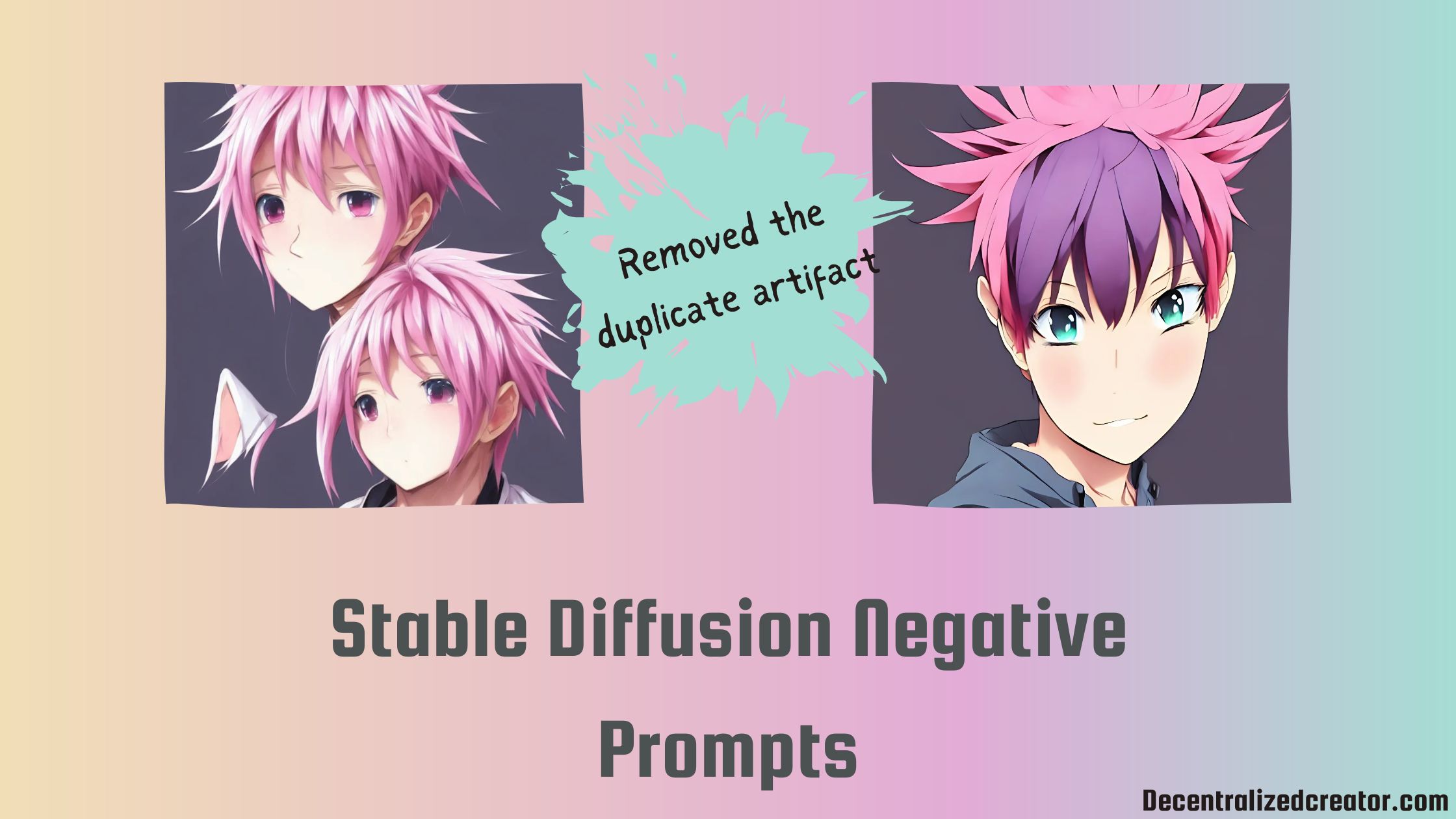 What is Negative Prompt in Stable Diffusion?

A negative prompt is an argument that instructs the Stable Diffusion model to not include certain things in the generated image. This powerful feature allows users to remove any object, styles, or abnormalities from the original generated image.

Though Stable Diffusion takes input known as prompts in the form of human language, it is difficult for it to understand negative words, such as “no”, “not”, “except”, “without”. Hence, you need to use negative prompting to gain full control over your prompts.

How to Use Negative Prompts in Stable Diffusion

Now that you know what a negative prompt is, let’s move on to how to use it.

The syntax of negative prompts varies according to the different GUIs of the Stable Diffusion model.

Before knowing how to use negative prompts, it is essential to know prompt weighting. 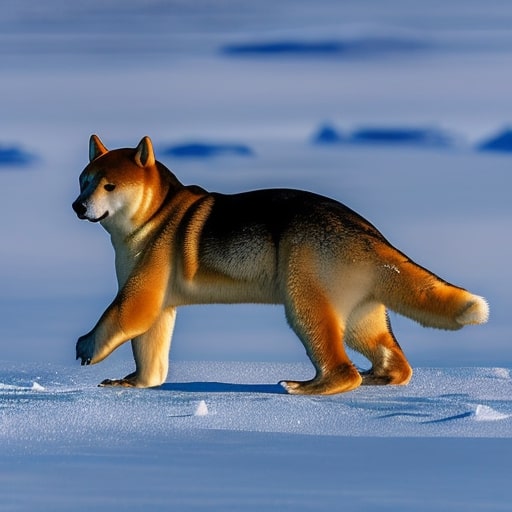 Alternatively, you can assign weights to each words in your prompt for finer control. 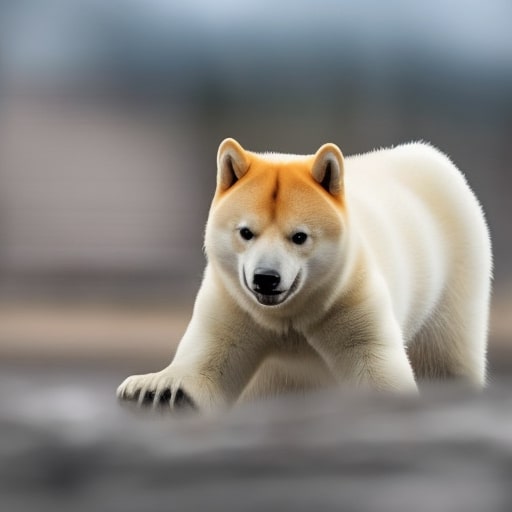 Below is the same prompt 1, in which I have swapped the weights for clear understanding.

Since I have given more weights to polar bear, you can see the dominance of polar bear characteristic in the output. 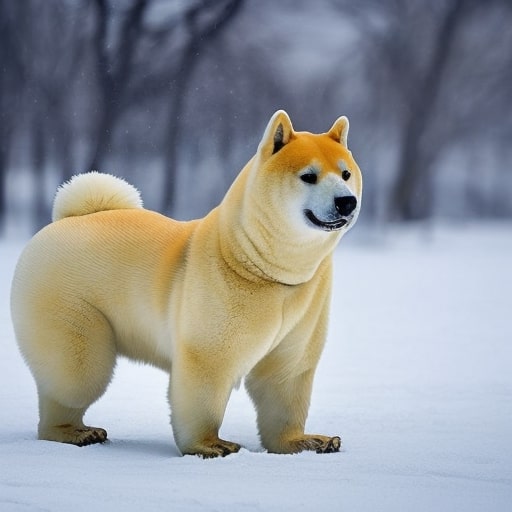 How to Use Negative Prompts in DreamStudio

DreamStudio does not have a dedicated option for negative prompts like seed or CFG scale. Hence, you need to include a negative number (prompt weight) in your prompt to use negative prompts in DreamStudio. The keyword “negative:” can also be used as an alternative to mentioning what to omit.

The above prompt tells Stable Diffusion to not include a red suit in the generated image. 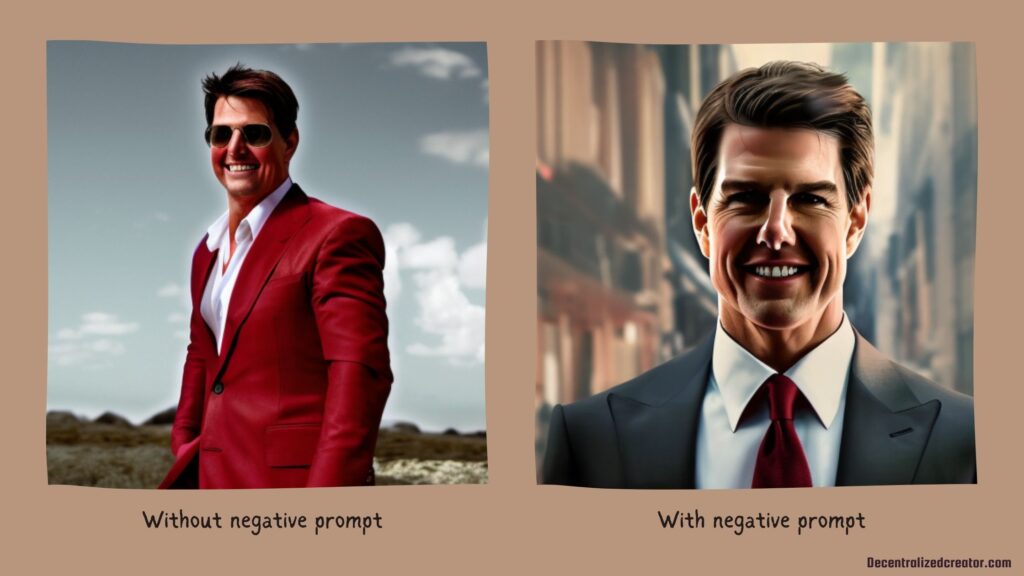 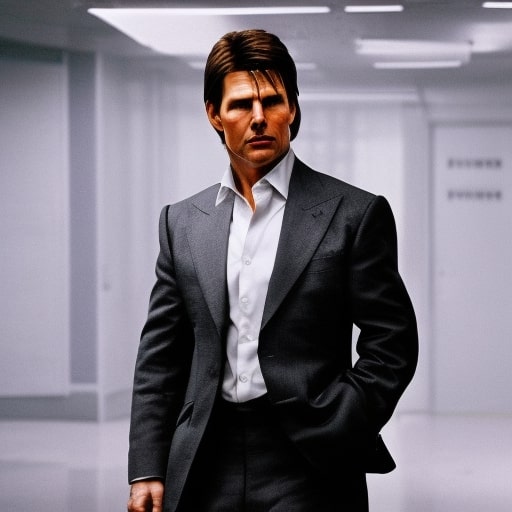 Note: Sometimes, DreamStudio will not obey either of these syntaxes. I have mailed this issue to the support team and keep you posted regarding it.

How to Use Negative Prompts in Other Stable Diffusion GUIs

Some of them have a separate field, like in NMKD’s 1.7.X version, where you can easily list all negative prompts.

If there is no separate field, you can either wrap the negative prompt with square brackets or use prompt weight.

Using the negative number will tell Stable Diffusion to omit the fruit kiwi while generating “A bowl of fresh fruits”.

Use Cases of Negative Prompts

As mentioned earlier, negative prompts can be used to remove objects, styles, and image abnormalities in pre-existing images.

Removing Cap from the Girl: 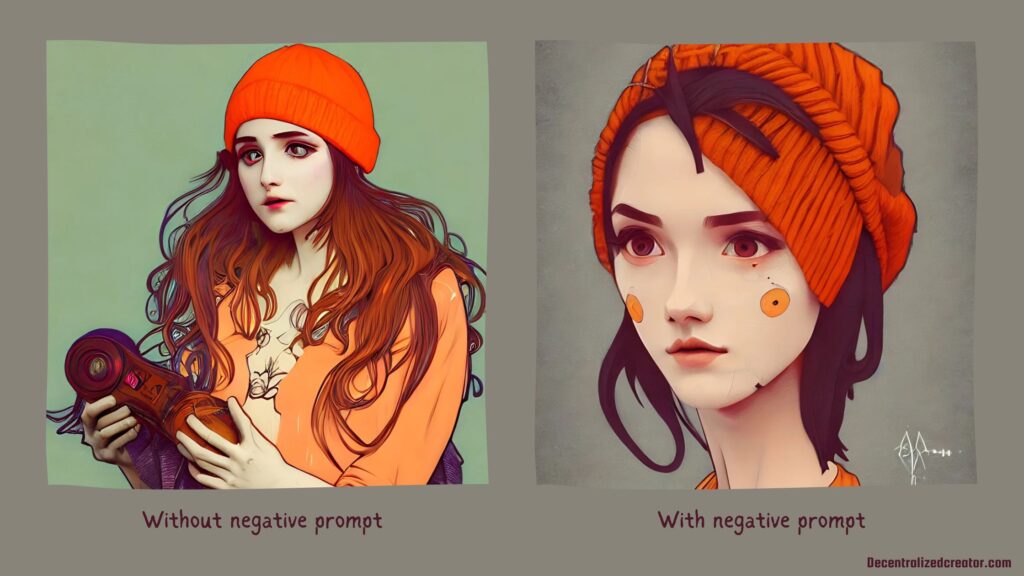 Removing Fog from the Scene: 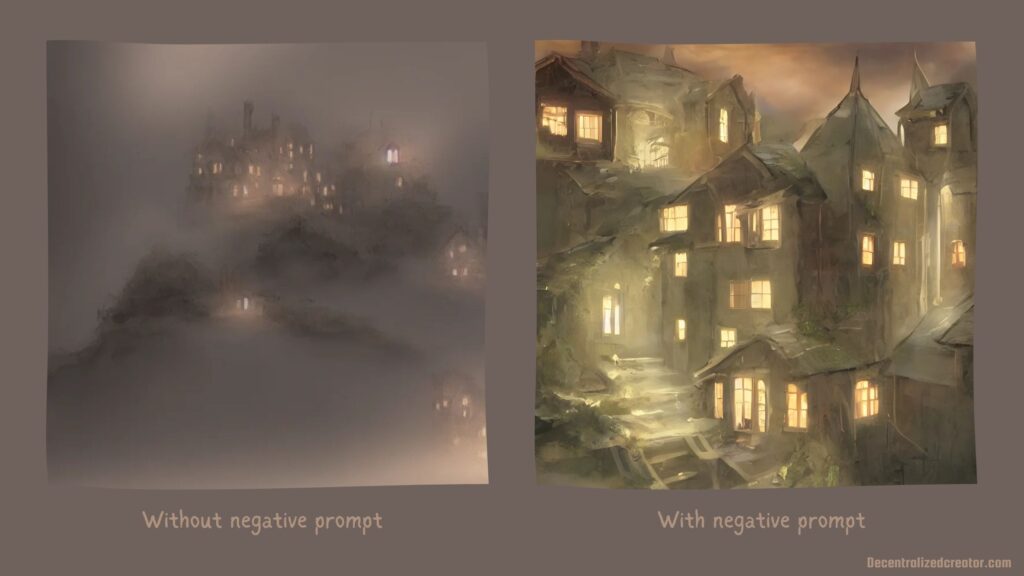 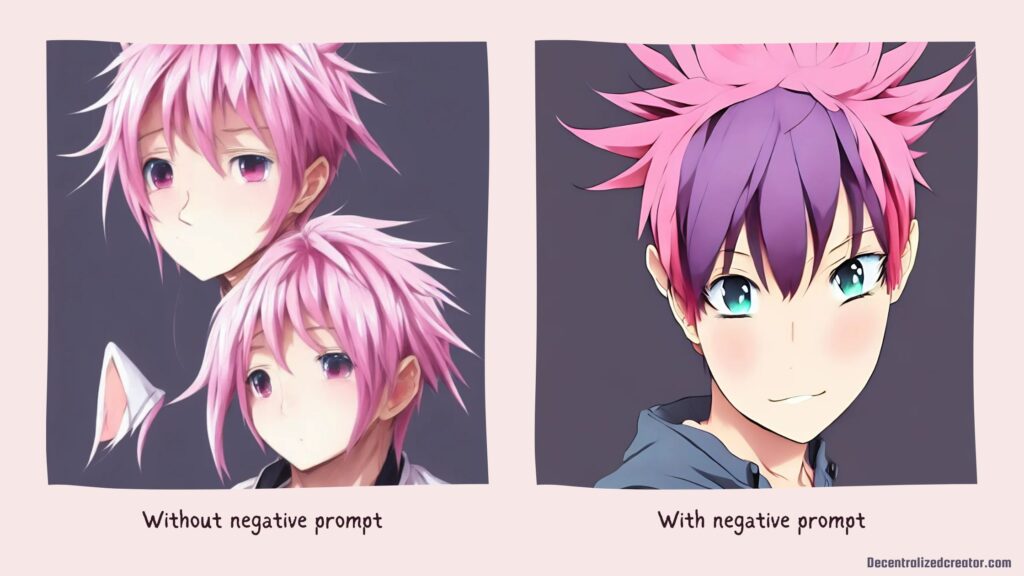 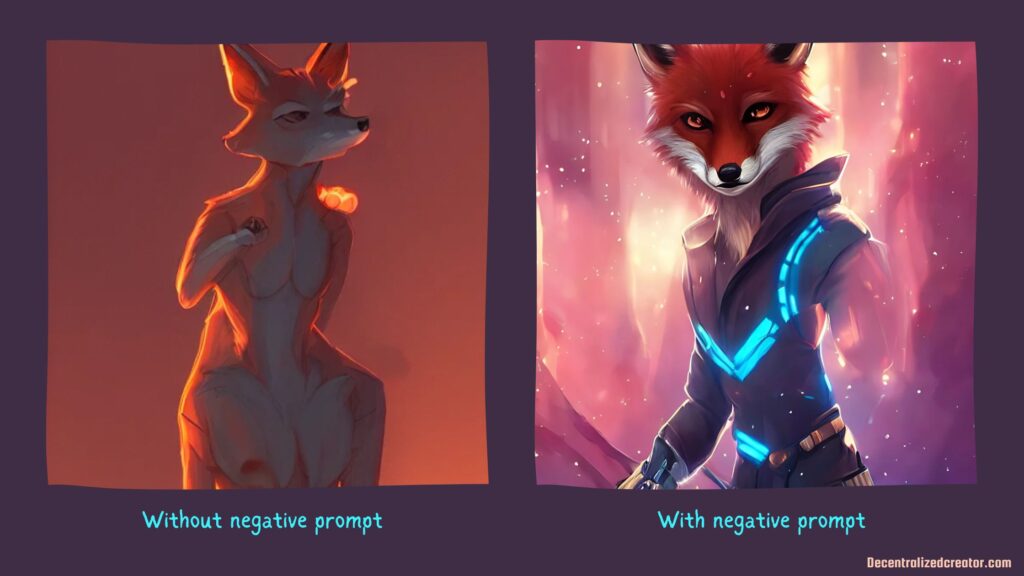 Some negative prompt keywords to keep in mind:

A Terrifying Fictional Character Born Out of a Negative Prompt

If you are using Twitter and are a follower of Stable Diffusion stuff, you may have heard about the fictional horror character “Loab”. 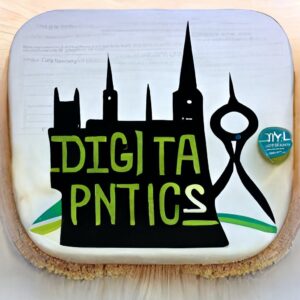 While experimenting with the negative prompts, Supercomposite had a weird idea of what would be the opposite of this logo. To fuel his idea, he immediately responded with a prompt “DIGITA PNTICS skyline logo::-1”.

To his surprise, the result was a devastated-looking older woman with rosacea on her cheeks.

After wondering about the result, he continued his experiment with “Loab” as the main character and produced a mega thread on it.

The thread contains photos of Loab as a result of experimenting with “combining” or “cross-breeding” with other images. It has bagged over 78k likes.

At the moment, you need to follow a few rules of syntax, such as square braces and prompt weighting to implement negative prompts. However, in the future, DreamStudio and other Stable Diffusion GUIs might have a dedicated field for negative prompts like height, width, steps, seed, and CFG scale attributes.