Every year 74 billion dollar in-game items are spent by players and the player received nothing in return and it all went to big companies.

Play-to-earn games are new types of games that reward players for the time end effort they spend both playing the game and growing the ecosystem.

The key difference between play-to-earn and traditional games is that blockchain economic design unlocks player-owned economies and rewards players who are able to reach advanced levels of skills.

Currently, the play-to-earn games are in the nascent stage, and in the next 10 years, the growth of play-to-earn industry will be exponential. Games are powered by powerful blockchain technology like Ethereum, Polygon, Cardano, Solana, and much more.

Axie Infinity is a game universe filled with creatures where players can aim to battle, bread, collect, raise and build kingdoms for their Axies.

Axie Infinity is played by more than 2.8 million daily active players and they have done more than 3.6 billion dollars in-house marketplace.

$AXS ( Axie Infinity Shards) are an ERC 20 governance token for the Axie universe. The holder can claim rewards if they stake their tokens, play the game, and participate in key governance votes. $AXS tokens are available in Binance and Uniswap.

Axie Infinity has a far more active community than any other play-to-earn game. You can follow their Twitter account which is followed by more than 915K members and you can join their Discord community which has more than 800K members, and their subreddit has more than 100l subscribers.

Gods Unchained is a play-to-earn trading card game where players continue in epic duels using fantasy cards. The game focus on a competitive play which means players must strategically outsmart their opponents by building a deck that is able to combat a wide variety of tactics.

Gods Unchained had done more than $10 million dollars in revenue and it has more than 450K registered active players.

$GODS is the native ERC-20 token of the Gods Unchained universe and it represents voting power, enabling players to participate in governance proposals.

You can follow them on Twitter with more than 90.1K Followers and join their community on discord which has more than 80K members.

Aavegotchis are NFTs stacked with DEFI-enabled tokens powered by Aave. Three attributes that determine the overall value and rarity within the Aavetoghci universe- spirit forces, traits, and wearable.

GHST is a non-fundable functional utility token that will be used as the medium of exchange between participants in the Aavegotchi ecosystem.

You can follow Aavegotchi on Twitter which has more than 93K followers and join their Discord community with over 20K Followers.

You can follow Splinterlands on Twitter which has more than 56K Followers and Join their discord community of more than 115K members.

Alien Worlds is an NFT metaverse where you can play with unique digital items. They have been partnered with Binance, Coinmarketcap, and PlayToEarn.

TLM ( Trillium) is a game token that gives you power in the Planet DAOs. You can earn Trillium in the mining games and stake trillium to the Planet DAO to vote in that Planets elections.

You can follow Alien Worlds on Twitter which has more than 117K followers and join their Discord community of more than 36K members.

The goal of Star Atlas economy is best to align with goods at scale with both a sense of long-term progression and short-term enjoyment to the player.

$ATLAS is a medium of exchange & inflationary in-game currency

Start Atlas is followed by more than 310 K on Twitter and joins their Discord community of over 160K members.

SolChicks is the fastest growing and largest play-to-earn multiplayer role-playing game in the Solana Ecosystem.

SolChicks has a diverse and passionate team of over 100 members with a world-class game development team responsible for MapleStory, PUBG, Dungeon, and Tera. Solchicks is backed by over 400+ well-known and prestigious investors.

$CHICKS token has governance rights and rights to game revenue.

REVV Racing is a blockchain arcade simulation car racing game. It is one of the popular car racing play-to-earn metaverse games.

In REVV Racing, cars are non-fungible tokens (NFTs) and all playing sessions are registered on the blockchain.

$REVV token which serves as the primary currency of purchase, utility, and action across all the games.

You can follow REVV Racing on Twitter which has more than 111K followers and join their Discord community of 22,642 members. 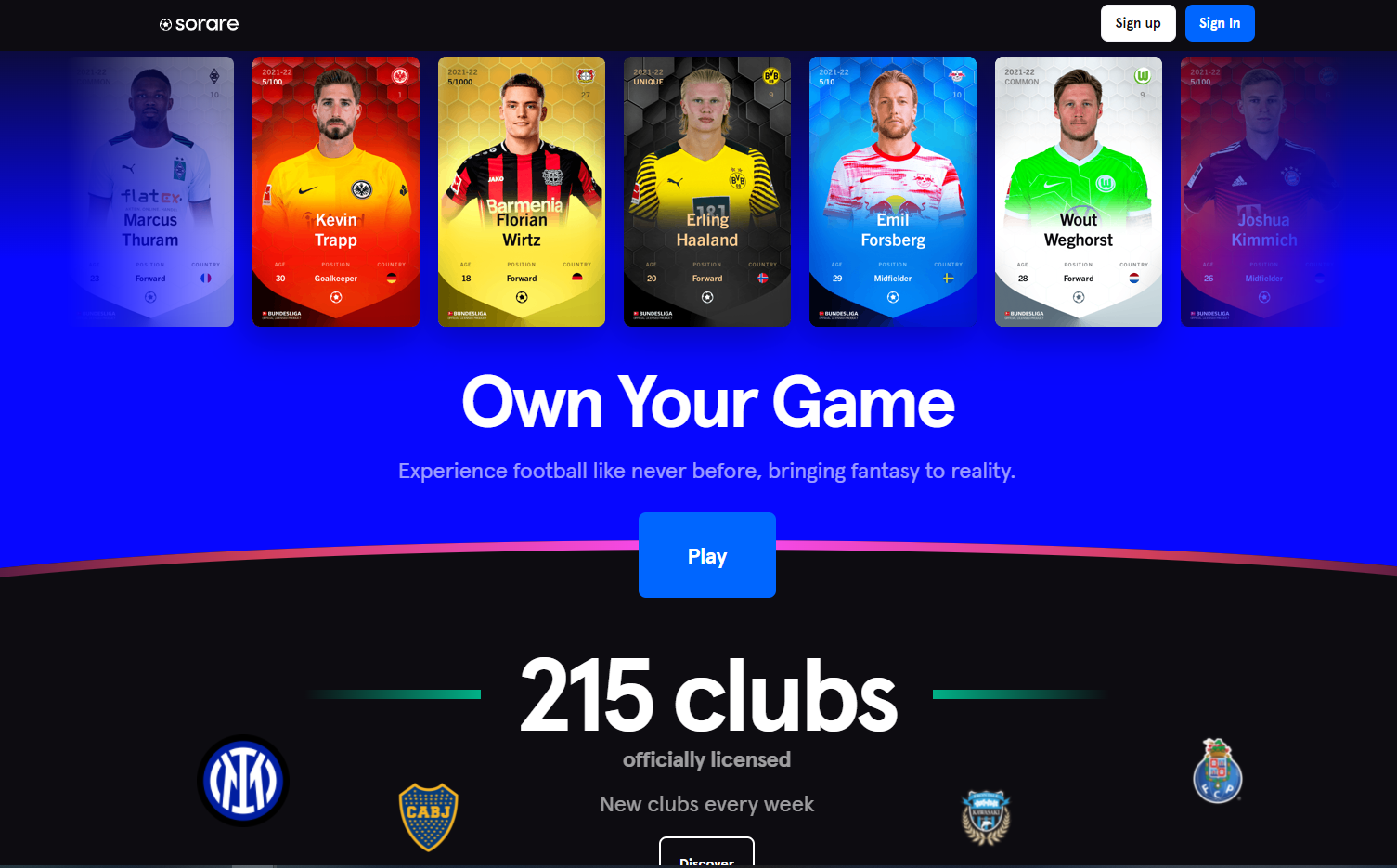 Sorare is a global fantasy football game where you can play with officially licenses digital cards and earn prizes every week.

Sorare is backed by world-class investors such as Accel Partners, gaming giant Ubisoft and is already trusted by 130+ football clubs.

The cards are blockchain digital NFT with proven scarcity. The technology which makes your collectible digitally unique.

You can follow Sorare on Twitter which has more than 85.5K followers and you join their Discord community of 40K members.

Crazy Defense Heroes is a play-to-earn mobile game with over 2 million downloads and thousands of loyal players.

$Tower is an ERC-20 token on the Ethereum blockchain and it acts as a medium of exchange, utility, and governance for the crazy kinds franchise.

Tower token is available on SushiSwap, Uniswap, KuCoin, and ApeSwap.

They are planning to launch a new blockchain PC game that allows users to use their crazy king’s franchise NFTs, earn Tower Token by playing and participate in various activities such as a tournament.