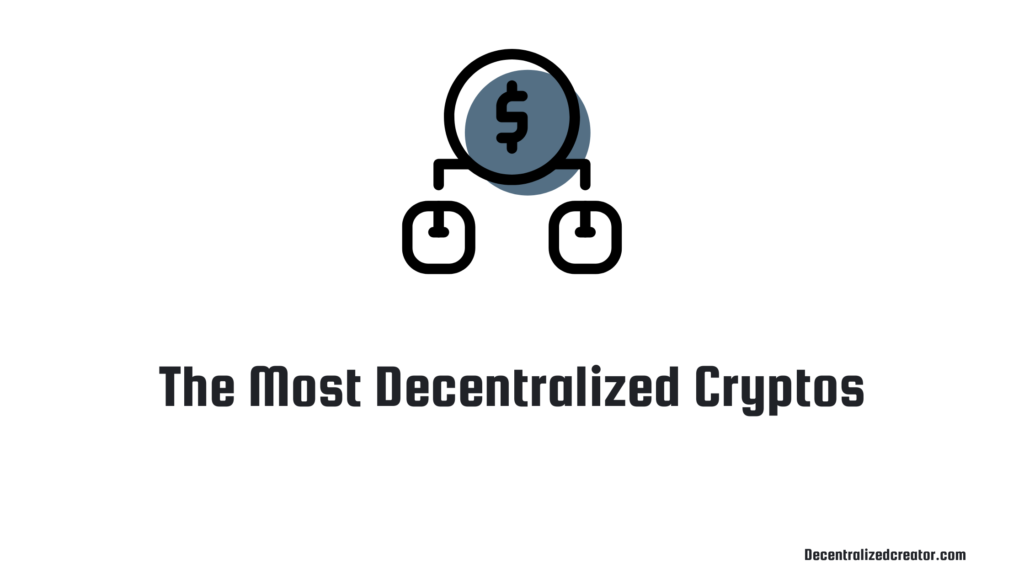 Have you ever thought about what makes cryptocurrencies exciting in the whole financial sphere? Well, it’s decentralization.

In 2008, Satoshi Nakamoto released a white paper outlining a peer-2-peer (P2P) financial services system that ran without a central authority.

This means you can use a Bitcoin exchange like the Independent Reserve and buy some Bitcoin for yourself, and trade it without the involvement of any financial institution (like a bank). Interesting, isn’t it?

So in this article, we’ll talk more about decentralization and see some examples of the most decentralized cryptocurrencies out there.

Here’s a simple comparison between the US dollar and Bitcoin — a leading cryptocurrency — that will help you understand decentralization.

But in Bitcoin’s case, no single entity has complete control over it. Instead, the entire Bitcoin network, which is made up of several entities/nodes, shares the responsibility of controlling the creation and distribution of new Bitcoins.

There can be no single central authority overseeing the currency or the blockchain it operates on. Instead, all the affairs related to the currency (like transfers or creation of new coins) are dealt with by a network of computers. And all the information gets saved onto a public ledger called the blockchain.

Note that this network of computers is open to all. This means that any random person can log into it and view the data stored on it.

All decisions — like new upgrades to a currency — are taken by the consensus of all the stakeholders involved.

These stakeholders include but are not limited to miners, investors, researchers, entrepreneurs, and traders.

Issuance and creation of new coins are done according to a strict protocol, which is decided at the onset of the currency and cannot be changed later on. For example, we know that there will be only 21 million Bitcoin issued from the day it was invented.

On the other hand, centralized currencies like the US dollar can be issued whenever the US government wants to do so.

For worse or for better, everyone around the globe can use a decentralized currency. Not only can they use it for making transactions, but they can also take part in the creation of new coins, which is called mining.

Now that we know what decentralization is and what its features are, let’s take a look at some of the most decentralized cryptocurrencies today.

What Are the Most Decentralized Cryptocurrencies?

With more than 15,000 active nodes distributed across the globe, Bitcoin is the most decentralized cryptocurrency in the entire ecosystem.

Anyone with an internet connection can take part in the Bitcoin network. This not only means that they can buy and sell Bitcoin, but they can also mine it (create new Bitcoins).

However, the whole process is not as decentralized as it sounds. That’s because, in order to become a Bitcoin miner, a person needs to have access to extremely expensive and energy-intensive hardware systems (also called mining rigs).

Since only a handful of people can afford such systems, this concentrates the mining power on a very small group of people, giving them tremendous control over the network.

Ethereum is the second-most popular cryptocurrency after Bitcoin. It was created in 2015 with the aim of becoming a decentralized platform that can run smart contracts.

Ethereum’s decentralization comes from the fact that it is an open-source platform. This means that anyone can suggest improvements to the Ethereum network. And this is one reason why Ethereum has one of the most active developer communities.

However, it’s the Ethereum creator Vitalik Buterin who authorizes any new upgrades to the currency. With this power, he can steer the project to his liking, making Ethereum’s development a highly centralized process.

Additionally, the global distribution of Ethereum nodes is also fairly concentrated in the USA, which accounts for 45% of the nodes. This further hints toward a certain level of centralization in Ethereum’s current framework.

Litecoin is often referred to as the ‘silver to Bitcoin’s gold’ or ‘digital silver’. It was created in 2011 with the aim to become a global payment network, similar to Bitcoin.

Once this happened, the mining and the decision-making power conglomerated under a single mining pool, making them really influential over the Litecoin network.

Currently, the four biggest mining pools of Litecoin are ViaPool, LitecoinPool, F2Pool, and AntPool. Together, these control more than 50% of the total hash rate.

Decentralization is one of the most fundamental features of cryptocurrencies. It not only makes them unique but also gives them an edge over traditional fiat currencies.

Bitcoin, Ethereum, and Litecoin are some of the most decentralized cryptocurrencies out there. However, they are not completely decentralized as mining pools and individuals with high hash rates can control a large portion of their networks.

Finally, if you want to stay updated with all of the latest developments in the decentralized finance (DeFi) ecosystem, make sure to follow these 10 Twitter accounts.